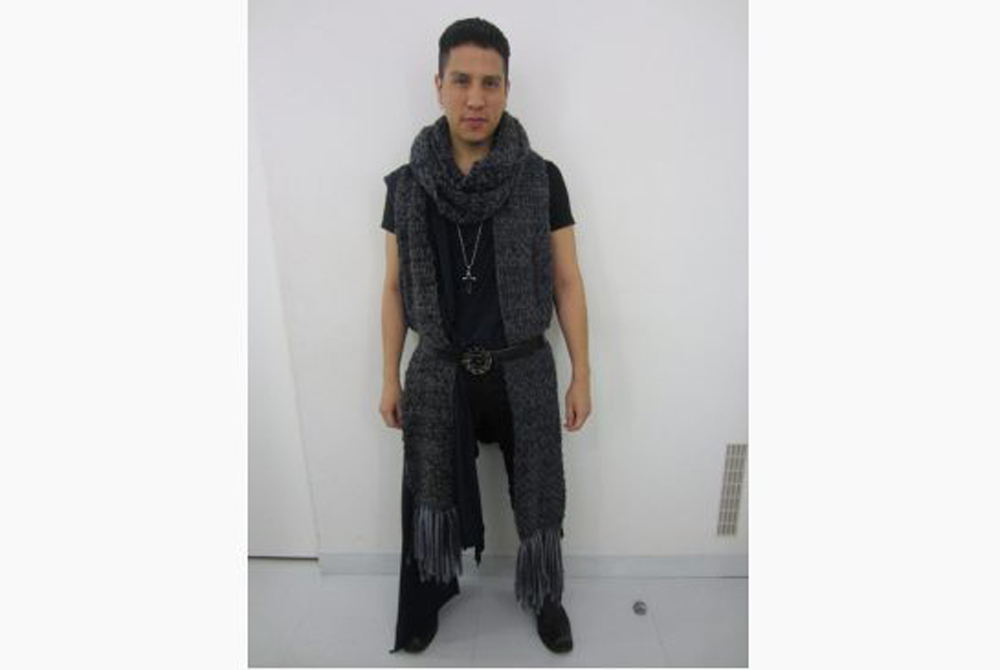 Listening to one’s inner style voice and making brave fashion choices can be challenging, even in the most sophisticated urban centres. But imagine what it would be like to grow up in a rural setting, light years away from the grit and jazz of the big city, and harbour a passion to express yourself through style, to be an original, and develop a distinctive mode of dress that yours and yours alone. It wouldn’t be easy, but for 32-year-old Israel Garcia, there was no other choice. Garcia grew up on Walpole Island, First Nation, in southwestern Ontario. Determined to get out into the world and pursue a creative career as a hairstylist, Garcia made the bold move to Toronto, and started making his fashionable mark. Ever since he started working at Yorkville’s Daniel salon, owner Daniel Fiorio says it’s been an absolute treat. “Everyday, Israel dresses in such an interesting way! It’s a real treat… an absolute delight to see the way he puts himself together.”   In the few times I’ve run into Daniel at the CTV building on Queen St. West, he’s amazed me with his bold and uncompromising direction.

Bordering on the avant-garde when it comes to the way he plays with proportions, Israel’s fashion forward approach puts him in a style league all his own, and affirms his highly original vision. He cites David Bowie as one of his greatest fashion icons, because of that rock star’s evolution over the years, and the fact that Bowie’s style has always told a story. When it comes to designers, Israel gleans the most inspiration from those with a decided edge. “Vivienne Westwood, Alexander McQueen, Yohji Yamamoto, and Jean Paul Gaultier are my favourites, because they all have such a unique style. You’ll instinctively know if someone is wearing anything by these designers. You can’t help but make a statement (in their clothes),” he says. But while Israel takes his cues from a number of different sources, including online information, fashion glossies, film and television, it’s his friends, and their closets, that provide the greatest inspiration. “It’s a mutual thing,” he laughs.

The question of style versus comfort is an easy one for Israel. “If I’m wearing something stylish, I couldn’t feel more comfortable,” he explains. Of course, keeping in shape helps keep his confidence up, and he works out at the gym three times a week, always careful about what he puts into his body. When it comes to his top shopping haunts, his appreciation for a high/low mix is evident, with locations such as UPC Boutique on Cumberland, Marilyn Hartley 69 Vintage Collective on Bloor St. W., Queen St. West’s Fawn Boutique and Carte Blanche, and of course, those two highly disparate style emporiums, Value Village and Holt Renfrew. For Israel Garcia, it’s all about having the right to choose. “Fashion without freedom isn’t fashion,” he states emphatically. When I last saw Israel, in CTV’s make-up room, he was wearing his vintage trademark big black boots, that cost him a mere $45, a Complex Geometrics top, that cost $185, pants from H&M, that cost $75, a scarf which was handmade by his friend, Carl Bremner, a vintage brass buckle belt, and a cross earring and necklace, which were gifts.

What is a fashion faux pas in your stylebook?

A lack of confidence. Not everyone is going to appreciate your sense of style, but wear it like you don’t care.

What is the most beloved item in your closet?

A beaded Native American breastplate my sister Summer bought me on a trip. I love it!

If you had to, would you rather be over-dressed or under-dressed?

Hands down, over dressed. If I feel under-dressed, I feel extremely awkward. Point me to the nearest rock! I’ll crawl under it.

I would have to say the 80’s are a fave for me. There was a lot going on style-wise. I have so much nostalgia for the past eras. There was something for everyone. But the present era is pretty exciting too.

If it doesn’t fit properly, don’t wear it!