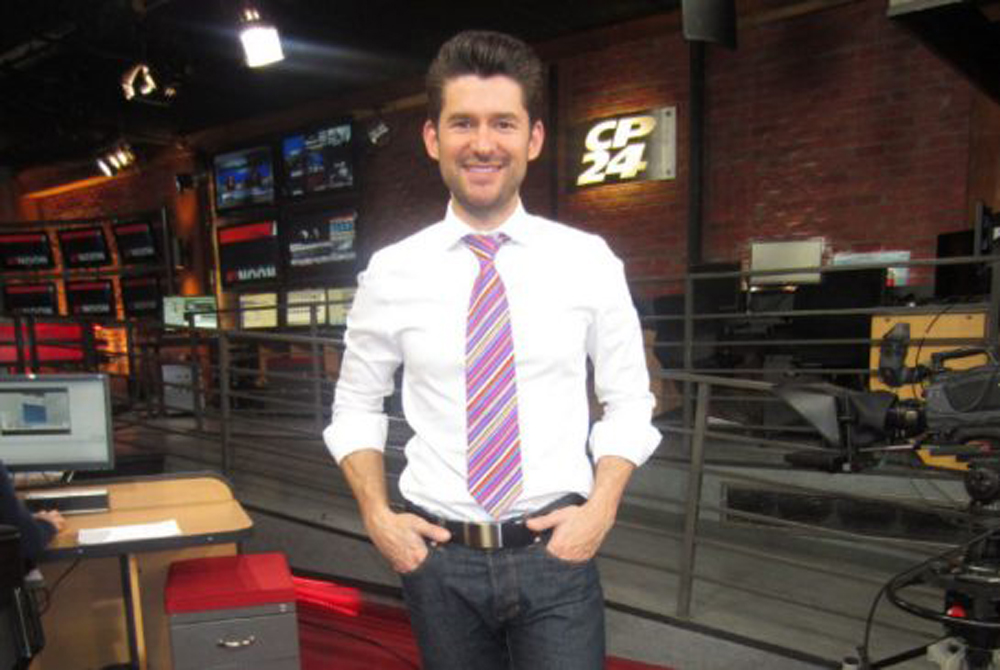 I’ve always had a soft spot in my heart for romantic young men with a penchant for the past. Couple that with charisma, silken vocal chords and suave style, and Toronto’s Matt Dusk fits the bill. The 34-year-old crooner, who just released his 5th album, “My Funny Valentine: The Chet Baker Songbook”, is decidedly debonair, as comfortable sporting slick Italian designer suits as he is singing old jazz standards. Maybe it’s because his passion is performing that he realizes the importance of image, and that wearing certain clothes in a certain way is all part the artistry you emit to an audience.

I first met Dusk in 2003, when we hired him to perform at the launch party of FQ Magazine, held at the newly opened Hotel Le Germain. I remember being taken not only with the guy’s big talent and strong self-confidence—most impressive for a 24 year old—but by his dapper sartorial style. Fast forward a decade later. I popped by the CP24 studio for a live hit with Stephen LeDrew last week, and there in the green room, waiting for his turn on the show, was the dashing Mr. Dusk. At first, I didn’t recognize him without his signature suit jacket. He was in shirtsleeves, but his striking striped tie, slick coif, and all-round aura of cool suggested he might indeed be someone to take style notes from. Within moments, he identified himself, and we started reminiscing about that old great party gig, when I first got turned on to his musical mastery.

Dusk grew up in Etobicoke, and though, like most kids his age, he was a pop music fan, he also couldn’t help falling in love with the great old jazz records his parents would play. He soon began collecting his own jazz recordings, especially inspired by the tunes of the late great Chet Baker. A student of St. Michael’s choir school, Dusk’s musical style evolved naturally, and his style sense grew with it. Polished suits soon became de rigueur, as he paid homage to many of his icons from the past.   “When I was a teenager, some would giggle when I’d wear a suit,” Dusk reveals. “When I was first signed to a record deal, they tried to get me to wear jeans and a t-shirt. Now, people ONLY think I wear suits, and it plays so well to the music I sing. Crooning is synonymous with dressing well.”

The mad affair with fashion likely started for Dusk when he began watching old movies. “I remember watching Casablanca when I was 17, and the only thing I remember was wanting a white dinner jacket!” he recalls. These days, a host of 20th century crooners constantly provide Dusk with his sartorial inspiration, who admits to having a poster of the “Rat Pack” on his wall. “Those guys not only knew how to sing, but they knew how to dress and live,” says Dusk. “It seems like a bygone era now.” Dusk, who gets his hair cut at Toronto’s Pierre Lalonde salon, swears by tailored suits as the epitome of cool chic, but he also knows that quirky and unusual accessories, like watches, cufflinks, and tie clips, can really help punch up the personality in a look. “But it’s difficult to get really cool stuff nowadays,” he laments.

“Most things are inspired from the past, so why not find them in the past,” says Dusk, who frequents antique stores for his special finds. “If you really want to stand out, be unique,” he advises. “Everything at an antique store is unique, for better or for worse. Just try to find something that matches your personality and you’ll be surprised at how many people will notices you…for better or for worse!” he laughs. Dusk cites his beloved cufflinks as the most important item in his closet. “Every single pair has a story. I go hunting for these things and can remember where I got every pair,” he notes.

Though he wasn’t wearing cufflinks on the day I ran into him at the CP24 studio, Dusk looked sharp. He was wearing his favourite label, Pal Zilera: The LAB shirt and LAB belt cost $195 each; the LAB jean were $295, and the LAB shoes were $450. Dusk’s Etro tie cost $145. His top shopping spot is Via Cavour, at 87 Avenue Rd. in Toronto, which he sees is as “one-stop shopping”. But aside from any tips about t fancy clothes, if you really want to understand Matt Dusk’s style, have a listen to his new “Funny Valentine” CD. It exudes class and charm, and is bound to put you in the mood not only for love, but for an especially “cool” approach to dressing.

When going out for a night on the town, dress to the nines

Depends where I am. At home? Comfort. Gimme those track pants that I got back in 1998, with that T-shirt that says S/P but has been stretched into a tent over the years. But when I’m out, it’s a freshly ironed shirt, and a 2 or 3-piece suit, matching belt and shoes, and some retro cufflinks.

Cary Grant. That guy is the definition of cool. Even when he was just by the swimming pool, he always looked like he was wearing more than a bathing suit. There’s something to be said about classic style.

If you had to, would you rather be over dressed or under dressed? Why?

Over Dressed! Unfortunately I have nothing in between dressing to the nines and dressing to the ones. And showing up at a fancy dinner in a three-piece suit is better than jeans and a polo shirt. I always ask myself: “How would James Bond dress?”

I’m kind of attached to the 60’s. Well-tailored suits, skinny lapel’s, skinny ties, fitted pants. I’m a pretty slim guy, so by using smaller accents, it allows me to look proportional to my clothes. Have a look at my music video “MY FUNNY VALENTINE”. www.youtube.com/watch?v=kmSPY_sOm2Q A picture is worth a thousand words.