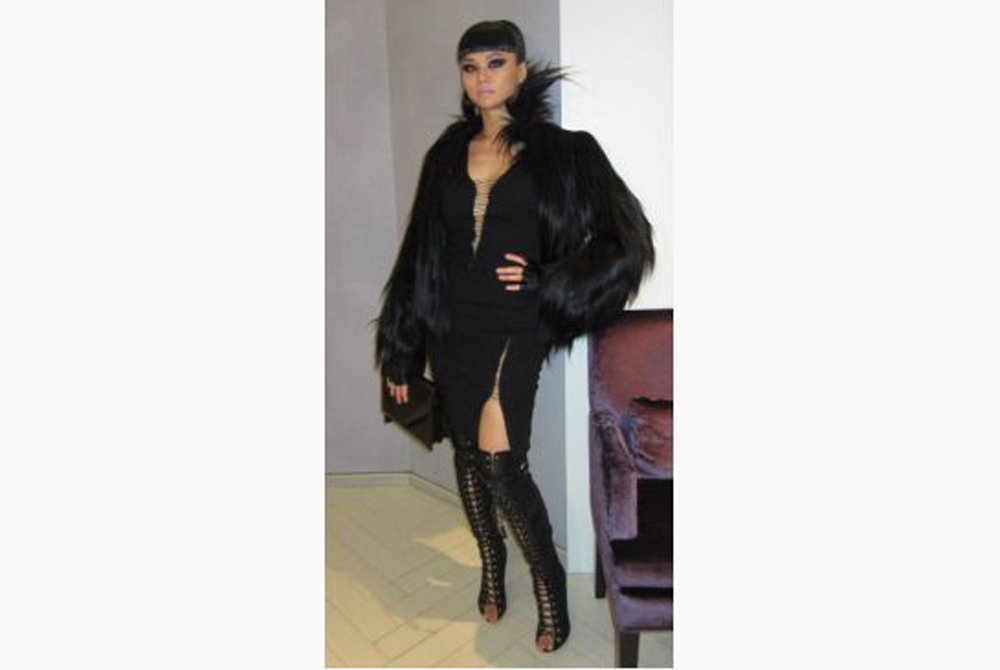 While subtlety and classic good taste usually make for great style, I’ll be the first to wildly applaud someone who goes the extra distance, and approaches dressing as artistic expression. I love being wowed, and seeing someone exude passion and fearlessness with their personal style is always exhilarating. Recently, at a designer event at The Room, I feasted my eyes on a dramatic young woman dressed to the nines. Even though it was the middle of the day, she made no apologies for wearing monkey fur, lace-up stiletto boots, and a dress that looked as though she was poured into it. Suddenly, it almost didn’t feel like we were in Toronto, and I knew I had to meet this daring, edgy diva who’d basically made my jaw drop.

I was fascinated to hear that Mina Heng grew up in Malaysia, where she first started watching Fashion Television as a little girl. Now in her early ‘30s, she says the high fashion fodder on our show inspired her, and she quickly became a fan of unbridled glamour. Moving to Edmonton, and living there as a young teen was tough, but she immersed herself in fashion as a kind of escape. “I religiously recorded Fashion Television programs and watched, re-wound, slo-mo’ed, and paused every single episode!” she explains. Eventually, Mina landed in Toronto. One of her first jobs was working on the catering staff at a Versace event, and she fondly remembers first meeting me there.   These days, Mina’s designing handbags, and is about to launch her own handbag collection. Like all fashionistas, she adores her accessories, and especially loves mixing high-end, low-end, and vintage looks. She cites Kensington Market and the St. Lawrence Sunday flea market as two of her favourite shopping haunts. “ I love the thrill of the hunt… of finding a gem in a pile of cast-offs,” says Mina. “I’m also completely obsessed with high-heels. The Room at The Bay has a great selection of designer shoes and avant garde pieces. I also love going to designer outlets to find pieces at knockout prices. My friends complain that I shop too much, and some of them have stopped shopping with me because they can’t keep up with me,” she reveals.

Mina is very detail oriented, and I was impressed by her perfectly coiffed hair and stellar eye make-up. She says her false eyelashes are her style trademark. “My eyes look bigger and better when I wear them,” claims Mina. “I think every woman should wear them. Such a small accessory makes such a difference.” It might sound like a lot of work, but Mina’s adamant that it’s always best to be-prepared, and she’d much rather be over-dressed than under-dressed. “You never know who you’re going to meet these days when you’re walking down the street,” she insists. “You can run into a celebrity, your future husband, or even worse, an ex-boyfriend!” The day I met her, Mina was wearing a vintage monkey fur jacket from Flashback in Kensington Market, an Altuzarra dress and fingerless gloves from Holt Renfrew, Emilio Pucci boots from Brown’s, and a Herve Leger bag. And she looked nothing short of absolutely fabulous!
What is your fashion philosophy?

Less is more, but more is more!  I don’t follow fast-and-hard fashion rules and I believe rules are sometimes meant to be broken.  I like being a chameleon and changing my look from time to time.  Sometimes, when I go to parties, I like to go a little over-the-top. But I don’t want to look like I’m trying too-too hard.  There’s that fine line that separates the well-dressed and the fashion victim.  Sometimes, I like to teeter on that line.

Like I said, I don’t believe in fashion rules (like matching the colour of your belt, bag and shoes). But I think ‘matchy-matchy’ is the new tacky.  It’s ironic that was how one was supposed to dress back in the day, and now, dressing like a fashion victim is the new style.  I believe in individual style and I love seeing people experimenting, taking risks and having fun with fashion.  I am all for individuality and integrity.  I think masquerading knock offs as the real thing is the ultimate fashion faux pas.  If you got an outfit from H&M, just say you got it from H&M.  Don’t say you got it from Gucci.  Fashion lying drives me nuts!

Throughout my travels, I’ve seen many stylish everyday women and men on the streets.  I definitely identify with fearless women like Anna dello Russo, Daphne Guinness and the late Isabella Blow.  I love Anna’s unusual yet polished way of mixing things, Daphne’s sense of gothic Disney fairy-tale pseudo-villainess, and Isabella’s larger-than-life eccentricity.

I have so many.  The current designers I love are Ricardo Tisci (Givenchy) and Nicolas Ghesquiere (Balenciaga).  Then there are the old school designers like Gianni Versace, Thierry Mugler, Claude Montana, Gianfranco Ferre, John Galliano, and the late Alexander Mcqueen that I still love.

Do not be afraid to try new things.  As we get older, we get comfortable with certain things, making it easy to get stuck in a style rut.  We should always challenge ourselves and experiment with fashion.  Can you imagine living in an oppressive society or country where you are forbidden to wear this or that?  That is why we should not take our freedom granted and cherish the fact that we have a choice.  Therefore, exercise that freedom and be fabulous!