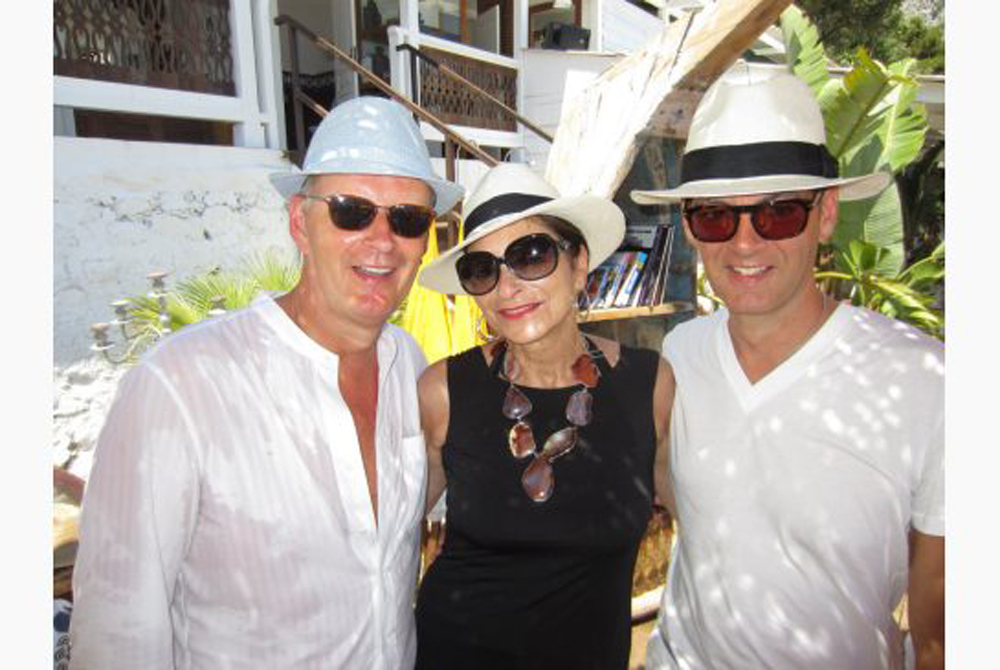 Personal style is usually the subject of this column: the machinations of editing one’s wardrobe, the garments and accessories that help show the world who we are, the business of strutting it all with joy. But recently, on the French Riviera, wardrobe was merely a springboard for the imagination, as I witnessed two dapper Irish gentlemen take the notion of personal style to inspiring new heights: The two enticed 125 friends and family members from around the world to throw caution to the wind, and in the spirit of the legendary 1961 film “To Catch a Thief”, channel the iconic Grace Kelly and Cary Grant, travel to the Cote d’Azur, and celebrate style and life in a manner so compelling, that all who were there were not only charmed but captivated.

John Mahoney a corporate communications consultant, and Kieran Moore, a recruitment executive, first fell in love 25 years ago. Earlier this month, along with celebrating Mr. Mahoney’s 50th birthday, the Dublin-based duo staged one of the most moving commitment ceremonies I’ve ever witnessed, performed by a female Humanist Minister from Sri Lanka, whom they’d befriended several years ago. Mahoney and Moore’s marriage festivities, planned with immaculate attention to detail, had the pomp and pageantry of a captivating Hollywood movie, with enchanting locales that added a romantically surreal edge to an enduring love story filled with passion and vision.

The excitement started back in January in Dublin, when I attended another soiree the couple hosted in celebration of Mr. Moore’s birthday. The event also served as a means to whet guests’ appetites for the impending nuptials, six months away at that time. Because Fashion Television had been extremely popular in Ireland for years, Mr. Mahoney asked me to address the party, and talk about the style of Grace Kelly and Cary Grant in the hopes of inspiring their friends to turn up the style quotient when it came time for the big wedding. No one was really expected to dress in vintage fashion, but evidently, the information I imparted that night was taken to heart: All the wedding guests were careful to pack the chicest attire, taking great pains to punch up the panache with crisp linen suits, striking silk ties, and beautiful pastel shirts for the guys, and sexy sundresses, elegant cocktail frocks, and smart shoes and bags for the women.

But it was the swish locations the couple chose for their festivities that really inspired us to get decked out: No question that people and clothes always look better against magnificent settings. Take for example the first night’s event—Mr. Mahoney’s 50th birthday party—for which the revelers took over La Reserve de Nice—a multi-level restaurant, with an Art Deco cruise liner inspired décor, and a sensational panoramic view of Baie des Anges. It felt like we were on a grand yacht, with the champagne flowing incessantly.

The next evening’s commitment ceremony was staged in the town of Beaulieu sur Mer, one of the locations of one of my all-time favourite films, the 1988 Dirty Rotten Scoundrels, starring Michael Caine and Steve Martin. (In that movie it was referred to as “Beaumont-sur-Mer”). The venue was La Rotonde, a magnificent, recently refurbished Belle Epoque building. Everyone came decked out in their finery, sipping champagne and nibbling on gourmet offerings like divine pate de fois canapés that looked like little French pastries. For the ceremony, there were delicate wooden fans on each seat, inscribed with “Keeping it cool with John + Kieran”, all in an effort to help us deal with the Riviera heat. There wasn’t a dry eye in the house and the couple read specially prepared love letters to each other. The Humanist Minister spoke of the extraordinary bond between the two men, life partners for a quarter-of-a-century, sharing a journey that had already been so challenging, adventurous, and inspiring—knowing somehow that the best was yet to come. After the ceremony, we cleared the hall, and partied on the terrace, just long enough for the tables to be set. And what fantasy table décor! Centre pieces consisted of hundreds of purple orchids that had been flown in, teamed with huge white ostrich feathers. But the piece de resistance for me was the legendary “Shall We Dance?” scene from the 1956 film ‘The King and I’ that played on a big screen. Just as Deborah Kerr and Yul Brynner launched into their sweeping number (watch it at http://www.youtube.com/watch?v=5qy5z_n-SOM if you really want to feel good), the new ‘Mr. and Mr. Mahoney Moore’ were introduced. The stylish couple marched out on the dance floor, and joined the on-screen action for one of the most exhilarating waltzes imaginable. Instantly, we all believed in magic.

The next day, revelers were invited to Anjuna Beach in Eze Bord de Mer (where U2’s Bono and The Edge both have houses). The exotic beach restaurant, which had a distinct Balinese feel, was rustic and relaxed. And as we lapped up the sun and surf, dined on decadent platters of Mediterranean seafood, and imbibed even more bubbly, we reminisced about the wondrous weekend, and marveled at the unparalleled aplomb of our gracious, imaginative, and ultimately stylish Irish hosts.