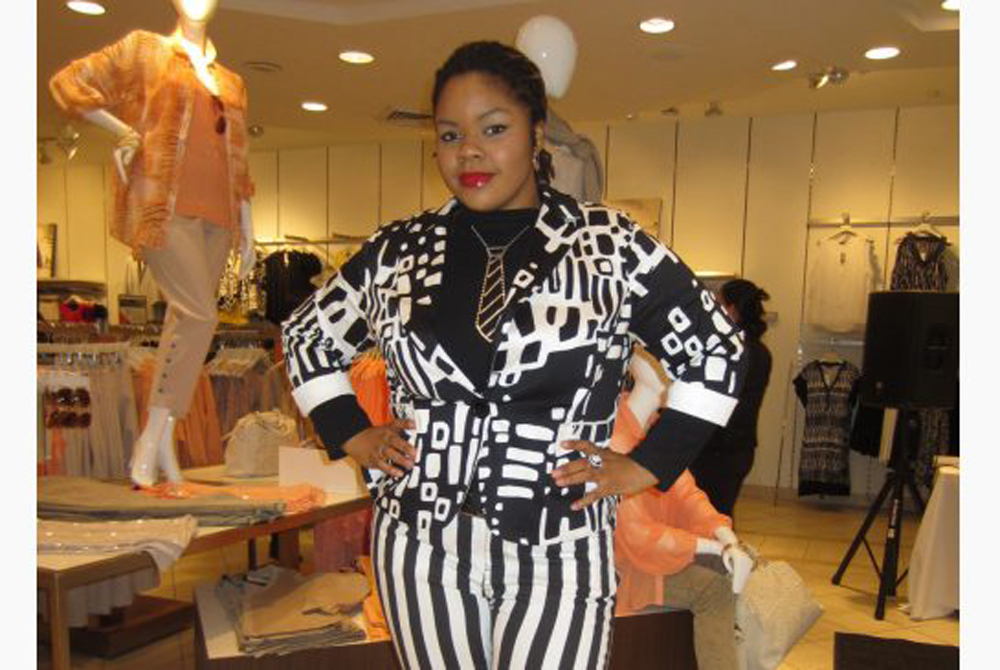 Beyond any wild prints or flashy styles, the first thing I usually see when I encounter a person of real style is their sense of inner confidence. They ooze a kind of upbeat energy that transcends what they’re actually wearing, and they never fail to leave an indelible mark on my mental roster of fashionable subjects. Over the past few years, on my frequent jaunts to Montreal, I’ve encountered a bold and beautiful lady who’s become part of that fashionable city’s style landscape for me. I can’t remember exactly when I first met her, but it was likely at some media reception. Nowadays, 27 year-old Sarah St-Fleur is considered quite the “It Girl” in Montreal style circles for her unparalleled panache and strutting every fabulous look she concocts like she really owns it.

“Always act like you’re wearing an invisible crown.” Some once said that was the key to projecting self-esteem. And St-Fleur, who’s adopted the moniker “XXL”, has an unquestionable regal air about her, aptly dubbing her two-and-a-half year old blog “QueenSizedFlava.com” (And that’s “flava” as in “flavour”.) She’s actually a professional banker who simply has a penchant for strutting it and empowering women—plus-size and otherwise. Besides constantly posting pictures of herself in chic get-ups, she also spends time philosophizing online about the kind of attitude you’ve got to embrace if you really want to shine, all the while remaining devoutly true to herself. “I’ll say this once and for all,” she wrote on a recent post, “I could not care less about those preconceived notions that people have about how I should dress, how I should talk, or how I should act because I was wired this way,” she writes. “I had to learn the hard way that pleasing everybody is an impossible task. Therefore, as long as the person watching in the mirror is happy, then that’s all that matters,” she advises.

Born in Montreal, St-Fleur says New York is like a second home to her. She’s been going to the Big Apple since she was little, and spends most of her summer vacations there. Maybe some of that classic American boldness rubbed off on her, because she does have a sartorial style that’s as in-your-face and unapologetic as I’ve ever seen. “If you’re going to wear, it, you better own it!” she laughs. She does most of her shopping in New York State, often going to the Champlain Mall in Plattsburgh for a quick shopping fix, since it’s only an hour from Montreal. She also favours Macy’s in Manhattan, and shops online for deals. Leopard prints, vivid colours, and prints are all part of her style trademark for one very simple reason: “I love to stand-out from the crowd,” she admits.

Of Haitian descent, St-Fleur claims fashion has always been a part of her life because, in her culture, “any excuse is a good excuse to dress up”. As a little girl, she remembers watching her mom getting ready for work. “Every morning, she would make it seem like she was attending an upscale event with her clothes and her make-up,” recounts St-Fleur. “I remember telling myself that I was going to be just like that when I grew up. Until this day, my mother prides herself on how long she takes to get ready for a party and how good she looks when she is done,” she says.

These days, St-Fleur’s moods are what dictate how she dresses, and all her ensembles are wonderfully inspired. I was in Montreal recently, at the Addition-Elle store on St. Catherines St. I recently launched a line of my EDIT clothing at the plus-size chain, and St-Fleur dropped by to say hi, decked out in an show-stopping black and white outfit that paid tribute to one of the season’s hottest graphic trends. Her jacket, which she’d purchased at Addition Elle for $99, was teamed with $10 Old Navy turtleneck and a pair of funky jeans from Forever 21 that she got for $29. Her shiny Doc Martens boots cost $150, while her fun accessories, including a faux tie from Rue 21 and a cameo ring from Wal-Mart, cost $20 and $10 respectively. St-Fleur says that her confidence always starts with her outfit, and her physical sense of well-being is tied to regular twice-a-week workouts and two spin-classes every week, because, she says, “I’m worth it.”

What is a fashion faux pas in your stylebooks?
A lack of self-esteem…Regardless of how pretty you may look on the outside if you don’t feel the same inside then your since of style will never shine.

Heels or flats?
I wear a size 11w, so it’s hard for me to find gorgeous heels and it’s also why I often wear flats. But if Louboutin made size 11w, I would be in heels 24/7 because I have a killer walk in heels!

What is your style when you are at home?
To be honest, when I’m alone I can’t be bothered with clothes. As much as I love fashion, there’s nothing like the freedom of being naked.
Ever second-guess an outfit you’ve chosen to wear?
I don’t like second-guessing myself for anything I do. But life has shown me that humility is the best policy. So I will sometimes second-guess my outfit if I’m heading to a church, a business meeting, or anything that requires a more “standard” look.

Best fashion advice?
Wear something that makes you feel 7 feet tall. In another words, people should wear things that make them feel good about themselves.