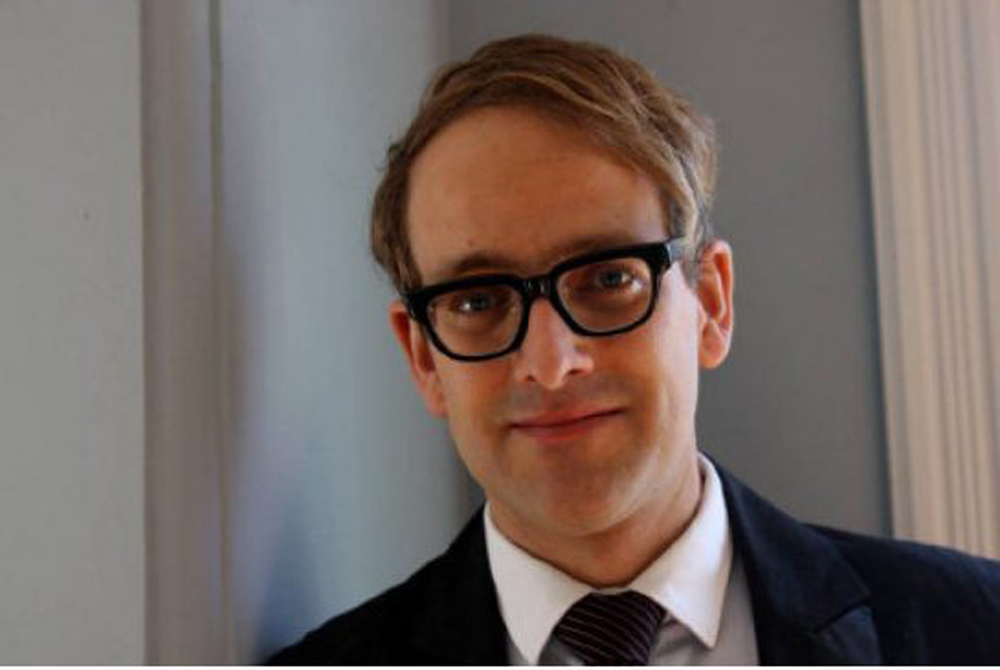 When it comes to the subject of style, some men will be boys—playful, irreverent, spirited, and impish. And in this busy, high-pressure world, where many males see shopping as a stressful chore and feel obligated to live up to certain style expectations, it’s always refreshing to find those guys who exude a genuine enthusiasm for the art of dressing up. Meet Shawn Micallef, a 37-year-old multi-media journalist who views his wardrobe as a kind of toy chest filled with building blocks. “Each piece of clothing is like a piece of Lego,” says Shawn. “And you just put them together. It gives you a lot of freedom to try things when you think of it this way,” he explains, stressing the importance of mixing things up and trying out different combinations. Shawn claims this sensibility makes for easy shopping. “You don’t have to go out looking for entire outfits,” he says. “You just buy bits and pieces as you see them that are your kind of Lego. Then you have a closet full of near-infinite variations on a theme.”

I had the joy of encountering Shawn Micallef at a recent chic soiree at the home of CTV news anchor Lisa Laflamme. The scene was buzzing with assorted intellectuals, and there was plenty of heady fodder for interesting conversations. But the moment I laid eyes on Shawn, I had to smile: His inherent sense of wit and whimsy, as expressed through his colourful, casual sartorial get up, was a breath of fresh air, and I knew immediately that I’d found a deserving subject for my Real Style column. Shawn, who hails from Windsor, Ontario has been living in Toronto since 2000. He writes about cities, culture, buildings, art and politics, and is currently a Canadian journalism fellow at U. of T.’s prestigious Massey College. But as intellectual as Shawn may be, he also appreciates the simple pleasure of shopping and cites Selfridges in London, England as “the greatest store in the world”. But this guy’s no snob: He also advocates shopping at chain stores in Toronto malls, and his taste in retailers runs the gamut from Winners to Holt’s. “Mostly inexpensive items, mixed with the occasional, more expensive bits seem to work,” he muses. His top three accessories of all time are his black frame glasses, pocket squares, and bowties, with his current most beloved accessory being a madras bowtie he found in New York. Shawn, who describes his mode of dress as “conservative down low”, confesses to being very picky when it comes to shopping, and shuns vintage finds. “I can’t get over the creepiness of wearing somebody else’s clothes,” he admits. “It’s just too intimate.”

The night I met Shawn, he was wearing a striking red gingham shirt that he got on sale for $65 at Holt Renfrew’s Last Call, at Vaughan Mills. His vest came from TopMan in London, and cost $30. And he was wearing a black and white check tie that he also picked up in London. His jeans were from Uniqlo in London, and were $60, and his argyle socks were also from London’s Uniqlo, priced at $9. Shawn’s $300 Prada sneakers were purchased at Holt Renfrew in Montreal, and his black vintage ‘70s glasses are from Spectacle on Queen St. West, and cost $300.   Shawn, who’s half Maltese, claims that the Maltese like to wear a lot of gold. He subscribes to that, and wears a ring on his right hand that belonged to his great uncle Johnny Catania. Uncle Johnny was a famous Maltese singer and comedian, and he also had a TV show in Malta before immigrating to Canada with the family. The rings on Shawn’s left hand are his grandfather’s.

What is a fashion faux pas in your stylebooks?
Untucked shirts; pants that drag on the ground; and anything “distressed”. Mostly though, a faux pas is wearing clothes that don’t fit — poor fellas wearing shirts and pants that are too baggy. Nice people become schlumps when their clothes don’t fit.

Most inspiring style icon and why?
David Niven, He was always done up just right and had the right thing to say, too. Then guys like Paul Newman, Steve McQueen and Yves St. Laurent also did it up right. These days, (hip hop artist) Mos Def and (R.E.M. frontman) Michael Stipe could share a closet with me just fine.

Favourite fashion era and why?
The late 1950s until just before the hippies took over the 1960s. Things weren’t baggy, no extra material flying around. Everything fit close, smooth, narrow and clean. The 1920s were similar. And the 1980s were great with post-punk, new wave and preppy looks that were all really clean and well-fitting. The odd thing is they were prosperous times but there was this feeling of austerity to the clothes. Maybe now’s the right time to be austere again…

Where do you get your style inspiration?
Each trip to London is a new dose of inspiration. It’s the best-dressed city in the world for men. People across classes and incomes dress well and there’s a sense of just the right amount of sartorial liberty and a celebration of eccentricity — you can do whatever you want — but it’s tempered by British somewhat-conservative traditions.

Best fashion advice?
Never panic. Fashion’s always changing and it’s hard to keep up. If you develop your own style, you can just add interesting things as you see them. Style lasts a lot longer than fashion. And you don’t need to spend a lot of money with the Lego method (save it for the odd perfect piece here and there — and shoes). Basic pieces fit together to create new things, and you can find basic pieces relatively inexpensively.